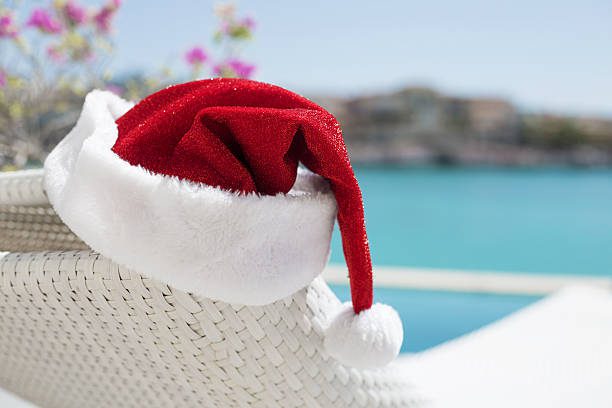 Now cut to the seasonal revelers in places like Florida and California. Although there’s not a snowflake in sight, that doesn’t mean they’re any less merry. They may have to do without tobogganing, but it’s beginning to feel a lot like Christmas in the tropics!

The fact of the matter is, when your climate doesn’t present the ready-made holiday backdrop, you need to manufacture one.

To build that special Christmas in 70-degree weather, look no further than Southern Living magazine for all the ways to make your days merry and bright!

Like many traditions, they start with one small step. Back in 2010 in Cocoa Beach, George Trosset thought it would be fun for him and his son to don the red robes of Santa Claus and hit the surf. This one-time family tradition now attracts “thousands of costumed surfers and spectators to the Central Florida shoreline each Christmas eve morning.”

Southern Living continues, “Some come in full-on Santa suits; others opt for holiday-themed tropical shirts or swimsuits (it is Florida, after all). Either way, there’s incentive to dress your best: An annual costume contest rewards the most festive beachgoer with a custom surfboard.”

Visiting Trees Made of Sand

Like the Christmas tree in Whoville’s downtown square, West Palm Beach residents gather around Sandi, “the world’s only 700-ton sand tree that illuminates the West Palm Beach shoreline through the month of December. Standing at 35 feet tall, the massive sand sculpture is the centerpiece of the South Florida city’s own winter wonderland, which includes live music, light shows, holiday movie nights, and visits from St. Nick himself.”

When you’ve got a gigantic coastline like California or a big, beautiful peninsula like Florida, you take advantage of it! All year round actually! Boat parades and water festivities are beloved Christmas customs in these regions.

Little gulf coast towns like Florida’s Dunedin make good use of the glittering intercoastal that lies between the mainland and two state parks that sit on the Gulf of Mexico, just north of the famous Clearwater Beach. Twinkling lights glow everywhere… even the palm trees are adorned. Whether a private vessel or a professional one, they too get all dressed up in holiday finery.

Even though St. Augustine’s famed Regatta of Lights was cancelled this year, this absolutely charming city still puts on a show with its Nights of Lights celebration.

Not to be “out-Christmased,” the Seminole Hard Rock in Fort Lauderdale hosts the Winterfest Boat Parade, which is also known as “The Greatest Show on H2O.”

Visiting the Happiest Place on Earth

Doesn’t matter if it’s Walt Disney Land® in California or Walt Disney World® in Florida’s Orlando, you can’t beat the beguiling spectacle of Mickey’s Very Merry Christmas Party. From the fireworks to the elaborate costumes, this magical kingdom knows how to throw a shindig!

This fun-filled playground is where adults embrace their inner child by shamelessly wearing their Mickey ears even though they may have more trepidation than they did when they were 12 about riding Space Mountain or Expedition Everest.

The beloved Key West Lighted Bike Ride is an annual event where visitors ride their bikes through a pre-set route.

According to Key West Historic Seaport, “Helping to gather toys for struggling, working, families of Key West for the holidays, the Lighted Bike Ride is an annual event hosted by the Wesley House Family Services. Each year, individuals ride through the streets of Key West on their lighted and decorated bike for the community to see. Each bike entry is based on donating one unwrapped toy or donating to the Holiday Helpers.”

Californians and Floridians pretty much wear the same clothes year-round. There isn’t much need to swap out clothes for every season, but they’ve still got at least one coat and several hoodies stowed in case of a weather emergency.

In the absence of scarves and mittens to ring in the season, they instead rock Santa hats and decorate their cars with reindeer antlers and wreathes on their car grills. Although there are not many Christmas sweaters in sight, there are plenty of festive tank tops and shorts showing their Yuletide colors!

Welcoming St Nick from the Water and the Sky

At the end of the Macy’s Thanksgiving Day parade, Santa makes his grand entrance on a shiny ride. He makes his southern debut a bit differently.

According to Southern Living, “Christmas lore might tell you that Santa’s primary mode of transportation is a reindeer-drawn sleigh. Not so in Florida. In Apalachicola, for instance, Christmas kicks off the day after Thanksgiving, when Saint Nick sails in on a working shrimp boat.

In Cocoa Beach, meanwhile, Santa skydives in to greet eager kids on the beach. And down in the Florida Keys National Marine Sanctuary, Santa’s been known to make his appearances in Scuba gear.”

There’s SO much to love about the change of seasons. Each brings with it a unique beauty, whether it’s the crocuses bursting forth from the soil in spring or the unsurpassed vibrance of autumnal leaves. Still… there’s a great deal to be said for being able to throw a winter pool party!

To make the space as Christmas-y as you wish,

Whatever holiday you are celebrating this year, and wherever and however you’re celebrating it, we wish you all the happiness and joy of the season.

Providing pool and home improvement loan solutions since 1979, Lyon Financial loves celebrations. We also love the difference we can make for your family by providing something that puts years of memories within reach. Call 877-754-5966 for more information about creating your ideal backyard oasis.

We believe the best family vacations are the ones spent in your own backyard.

As the industry leader in providing swimming pool & home improvement financing options since 1979, we offer personalized, hassle-free financial solutions tailor-made to your individual needs and qualifications. We eliminate the usual lengthy & stressful loan process to quickly and conveniently bring your backyard dreams to life.

We love the difference we can make for your family by providing something that puts years of memories within reach.